Avoiding the problem, "Event channel is unable to connect to web server. Do you want to reconnect?".

Kiran : Hey Champ, I am trying to build an application in cordys and I am facing a problem.

Champ : What is the problem that you are facing?

Kiran : There is no error while accessing cordys application, but this confirmation box keeps popping up every now and then only to increase irritation.

Kiran : That error which is shown below,

Champ : That is not an error right? You can simple click "Yes" whenever it pops up. Wouldn't that solve the problem?

Kiran : Yes, that would solve the problem temporarily. Can I fix it permanently?

Champ : Ohh Yes, You can!!!! First tell me, Can you see any error in the debugging tools of the browser? You must be telling me something so that I can solve your problem.

Kiran : Yes, It is trying to download some of the resource and it is failing because of some ERR_HOST_NAME_ERROR or something. I don't remember exact error but what I do remember is that there is definitely a problem with the hostname. I am using the application using the IP Address.

Champ : Thank you!! That information really helps. Now can you try from the command prompt to ping the hostname and as well as the ip address that you are trying to connect. Then let me know the results.

Kiran : I am able to get a response from ping to IP Address but not to the hostname.

Champ : Look!!!! This is the problem. Your system is not able to look up the hostname for the IPAddress that you are connecting.

Kiran : What should I do for solving this problem?

Kiran : You must be kidding!!!! Anyways thanks for your help champ. I understood the problem and it solved it :) See you again!!!!!!

This is to have an understanding of how de-serialization works when JdbcTemplate converts the query result into object form.

My Entity Structure looks as show below, 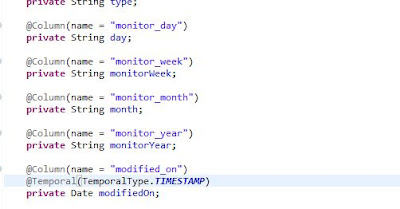 Now a piece of module was developed in order to retrieve data from database. This can either be done by using JPARepository or by using JdbcTemplate. I am using the later approach,

Below is the piece of code which I have used to retrieve database information and de-serialize the information in the entity shown above,

The targetClassName here refers to the entity shown above. Considering no exception case, this piece of code should retrieve information from database by executing the query which is present in "queryTemplate" and de-serialize it by using the className provided in the variable "targetClassName".

But somehow all of the data are not being de-serialized. Interestingly only the fields whose column names and variables are same (Ignore underscores and case) are being serialized, i.e., monitor_year is being deserialized because monitor_year and monitorYear are one and the same variable.

Hence it is must and should that the variable name which is being used should be equivalent to the column name that is being defined.

I have modified the entity as shown below 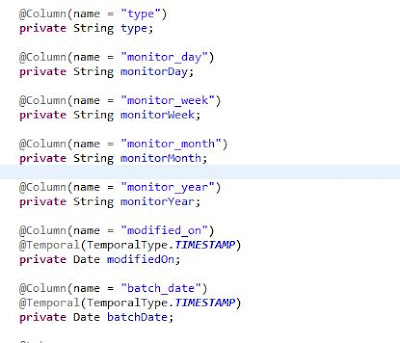 Once I have modified the entity as shown above, I was successful in fetching the result.

JdbcTemplate when executes the query gets the information which has meta-data of database (i.e., column names as of table column names). But now we need to de-serialize into an object format. Hence jdbcTemplate would want a kind of understanding between the variable names and the column names and hence it will assume these both are equivalent variables. This means that the column name "monitor_year" is equivalent to "monitoryear" or "MonitorYear" or MoniTORYear" or simply "monitorYear". Hence when there is a database column monitor_year, it will push the value into any of the above mentioned variables.

The problem with my previous approach was, the query result was giving response in the column "monitor_day" where as my variable's name is "day". This means the jdbcTemplate would consider "monitor_day" and "day" as two different variables and hence it will not de-serialize this field. The same was the problem with other fields as well.

Installation and change context path of gitlab server in linux

The installation process of gitlab-community edition is explained here,

Once you install, there might be a necessary to change the context path of the gitlab-server.


The same would be achieved by modifying gitlab.rb file present in the installation directory.If you have access to the file, then open with default text editor and modify the property external_url to http://192.168.10.10/gitlab

Alternatively you can use below command to modify,

Go to the configuration external_url in the file and modify the property to below,

Once you are done with the changes, you should let linux know about the change and to configure gitlab again, this can be done by the below command

Once the command is executed, the context path is configured for gitlab.

Execute DDL scripts when a spring application is initialized

Normally everyone would encounter a situation where in they want to execute few of the database scripts while deploying a solution. These scripts might include anything like executing a procedure, running a batch, insert script for defaulting of few values, update to existing dataset etc.,

When such situation arises, we can follow the below mentioned approach as an initial approach to handle it.

Spring by default tries to load a script file "data.sql" located in the classpath i.e., where the application.properties, log4j.properties etc., are present.

Hence try to consolidate all the scripts into one file and name it as "data.sql" and place it under "<<apacheTomcatFolder>>\webapps\<<app>>\WEB-INF\classes",